Infertility has been always addressed as one of the important, serious and costly health issues in different societies (1, 2). According to the previous studies performed in different countries, about 10-15% of couples suffering from infertility regard this disability as the worst experience in their life (3-5). This problem might cause marital conflicts, social injuries, divorce and other psycho-social problems (2, 6). At present, in Iran, about 3 million couples suffer from infertility. In 7% of infertile couple population, the cause of infertility is unknown.

The relationship between metabolism and reproduction has been always considered as controversial issues in the field of female endocrinology. Insulin, amino acids and low molecular weight IGF-binding protein-1 (IGFBP-1) have been introduced as effective signals in alterations of body fat and body mass index (BMI), but these alterations have been recently attributed to leptin level (7). Leptin, in addition to regulating body weight, plays an important role in regulating the functions of endocrine, reproductive and immune systems through suppressing food intake and increasing energy consumption. Deficiency of leptin or its receptors, in addition to causing obesity, leads to disturbing reproductive cycle, hormonal imbalance, as well as disorders of immune system, hematopoietic system and bone metabolism (8). These observations have indicated the important role of leptin in several physiologic processes and the relationship between abnormal leptin levels and many disorders (9).

Leptin affects menstrual cycles, directly and indirectly. It have been reported that leptin directly affects ovaries and hypothalamic-pituitary axis. Furthermore, its effect on follicle stimulating hormone (FSH)-dependent estradiol production in animals and its role in preventing starvation-induced delay in ovulation in mice show indirect effect of leptin on the luteinizing hormone (LH) concentration (10).

Leptin is an adipocyte hormone acting as a link between adipose tissue and reproductive system. It is also considered as a type 1 cytokine, due to its role in cell growth and maturation (11). Recent studies have reported that leptin is produced by both granulosa and cumulus cells of ovarian follicles (10, 11).

Leptin is used in the treatment of hypoleptinemia due to energy deprivation state, leptin deficiency and obesity-related hyperleptinemia. Due to leptin resistance in some obese individuals, leptin treatmentis used in patients with complete or relative leptin deficiency including patients with hypothalamic amenorrhea and lipoatrophy, but coadministration of this hormone with leptin sensitizers has been resulted in better outcomes in the treatment of obesity (8).

Since it has been proved that there is a definite relationship between infertility and menstrual irregularities in women with abnormal obese (OB) gene expression and peritoneal fluid is also known as an active biologic environment that is essential for regulation of ovarian function, ovulation, zygote implantation, and follicle collection (9, 11), any change in the concentration of substances in this environment is likely to affect ovarian function. Furthermore it can be postulated that the origin of some substances like leptin might be from follicular fluid.

In this case-control study, 90 women using convenient sampling method with regard to the inclusion criteria referred to the Infertility Center of Afzalipour Hospital, Kerman, Iran. After ensuring, all personal information remained confidential and there was no intervention with their treatment process. This study approved by Ethical Committee of Kerman University of Medical Sciences and done from September 2010 to March 2013 and all participants provided an informed consent.

Inclusion criteria were as follow (the presence of all 7 criteria was necessary): i. Age between 20 to 40 years, ii. BMI between 20 to 25 kg/m2, iii. Normal levels of FSH, LH (on days 2 and 3 of menstrual cycle), prolactin, testosterone and progesterone (between days of 19 and 21of menstrual cycle), iv. Normal semen fluid analysis and pelvic ultrasonography, v. Absence of any underlying complex disorders like diabetes, obesity, cardiovascular disease, any type of metabolic diseases and malignancies, vi. Negative result of autoantibody test and vii. No use of anti-inflammatory medicines. It should be mentioned that only infertile participants underwent laparoscopy and hysterosalpingography (HSG). First the information regarding demographic and clinical characteristics were collected and infertility investigations, including ovulation state, cervical and uterine factors, and patency of fallopian tubes, were then performed in couples referred for in vitro fertilization (IVF). All partners had normal sperm analysis. If infertility was due to male factor, the case was excluded from our study because they had no history of pregnancy and were not considered as unexplained infertility.

In all groups, the long agonist protocol for controlled ovarian hyperstimulation (COH) was used. Briefly, COH was performed by administration of human menopausal gonadotrophin (HMG, Ferring, Germany) after pituitary suppression with buserelin (superfact, Aboureyhan, Iran), starting in the midluteal phase of the preceding cycle. The dosages of gonadotropins were individualized according to serum estradiol (E2) levels and transvaginally ultrasonic measurements of the follicles. When at least three follicles reached to diameter of 16-18 mm, ovulation was induced by the administration of 10,000 IU human chorionic gonadotropin (hCG) 36 hours before puncture. Average number of follicles of each case was 12 (9-16).

To measure the serum and follicular fluid leptin concentrations, enzyme-linked immunosorbent assay (ELISA) kit (Labor Diagnostica Nord GmbH, Germany) was used. All measurements were carried out in duplicate. The intra- and inter- assay coefficients of variation were less than 3.7 and 6.8%, respectively, with the standard range of 0.5-100 ng/ml.

*; Mann-Whitney test, **; Kruskal-Wallis test, &; There is a significant difference compared to unexplained infertile group, ¥; Data are shown as mean ± standard deviation and #; The unit of measurement is ng/ml. P

Leptin has a wide range of functions from acting as an anti-obesity factor to an effective factor in reproduction, hematopoiesis, angiogenesis and T lymphocytes system (17).

The present study suggested that high level of follicular fluid leptin has a negative effect on reproduction in unexplained infertility. Enhanced leptin level may inhibit aromatase activities and prevent the transformation of androgen to estrogen, leading to the elevation of serum androgen and interferers with ovarian follicle growth and ovulation by suppressing estrogen production (20).

A recent study revealed that serum leptin level is significantly higher in unexplained infertile women compared to the fertile group and suggested that leptin as cytokine-like or hormone affects pathophysiology of infertility, but due to study limitation, leptin levels in serum and peritoneal fluid were not compared (19).

This relationship presents differently in persons with different BMI; for example, in patients with anorexia and low BMI and in obese individuals with high BMI, leptin shows contradictory effects. It can be hypothesized that a specified concentration of leptin is required for female productivity and both high and low levels of leptin can affect fertility. This effect is seen for both systemic leptin and follicular and peritoneal leptin (18).

In another study, systemic and central effects of leptin on gonadotropins have been less accepted and leptin effect on ovary has been considered more. There are more leptin receptors on ovary than in central nervous system (CNS) (19). 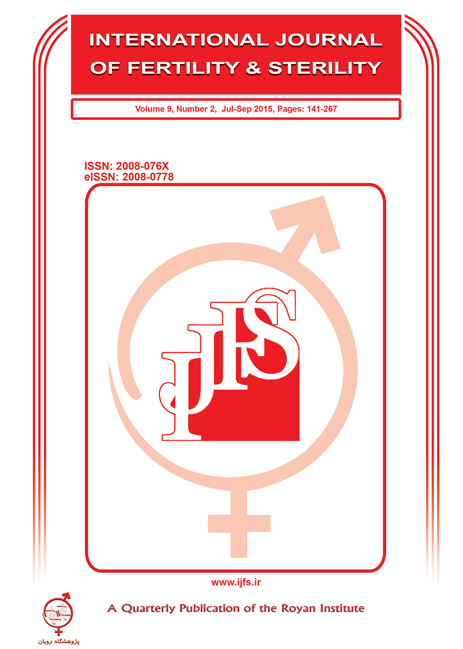