Background: This study assessed the relationship between endometrial thickness on day of human chorionic gonadotropin (hCG) administration and in vitro fertilizationintracytoplasmic sperm injection (IVF-ICSI). Materials and Methods: This prospective cross-sectional study included a total of 593 women. Patients were treated with either the agonist or antagonist protocol according to the clinician’s and patient’s preference. Endometrial thickness on the hCG day was measured by transvaginal ultrasonography (TV-USG). Patients were divided into four groups according to endometrial lines, as follows: 14 mm (group 4). Results: Implantation rate (IR), clinical pregnancy rate (CPR), and ongoing pregnancy rate (OPR) were significantly lower in group 1 than the other three groups (p < 0.05). However, there was no significant difference among groups 2, 3 and 4. Although the endometrial line in the agonist protocol was higher than in the antagonist protocol, the difference was not statistically significant. Conclusion: The chance of pregnancy appears to be lower in individuals with endometrial thickness less than 7 mm compared with those of higher value.

This was a prospective cross-sectional study. The study protocol was reviewed and approved by the Ethical Committee of Medical Faculty of Bozok University. Patients provided informed consent to participate. We used two protocols, agonist (n=135) or antagonist (n=458) as previously described (3,9). These protocols were administered according to the clinician’s choice and the patient’s preference. Endometrial line was measured by TV- USG in the midsagittal plane on the hCG day. All women were divided into four groups according to endometrial thickness. In group 1 (n=14) the endometrial line was

Follicular development was monitored and dose adjusment performed according to the E2 level and ultrasonographic measurements. The endometrial thickness was measured by the same clinician utilizing TVUSG. When 1 or 2 follicles reached 17 mm in size, hCG (Pregnyl® 5000 IU×2, Schering-Plough, USA) was administered for final maturation. TV- USGguided needle aspiration of the follicular fluid was carried out 35 to 36 hours after hCG administration. ICSI was performed in all cases. Cleavage stage embryos were transferred into the uterine cavity on day 3 or 5. A maximum of two embryos were transferred under transabdominal ultrasound guidance. Luteal phase was supported by administering transvaginal progesterone (Crinone 8% Vaginal Gel®, Merck-Serono, Switzerland) on the oocyte pick-up day and continued for 12 days (until the serum pregnancy test). Clinical pregnancy was confirmed by the presence of a fetal sac or fetal cardiac activity at ultrasound examination two weeks after the pregnancy test.

Patient characteristics such as basal hormone levels, duration of infertility, body mass index (BMI), antral follicle count (AFC) and age were analyzed. The groups were homogeneous in terms of these parameters. We excluded cases in which testicular sperm extraction (TESE) procedures were performed. Also patients, whose BMI was >30, were excluded. All patients underwent standard IVF-ICSI procedures. One cycle was used for each patient.

A total of 593 women whose ages ranged from 20 to 39 years were included in the analysis. The patient characteristics are shown in table 1. Patients’ age, duration of infertility, basal FSH levels, basal E2 levels, BMI, and AFC were compared but the differences were not statistically significant. The endometrial thickness ranged from 6.1 mm to 21.4 mm. Although no threshold was observed above which a pregnancy was unlikely to occur, clinical pregnancy rate (CPR) was significantly lower in cases with an endometrial thickness below 7 mm (Fig 1).

Retrieved oocyte number, transferred embryo number, and the fertilization, cleavage, and implantation rates (IR) were similar in all four groups. Implantation rate, CPR, and ongoing pregnancy rate (OPR) were significantly lower in group 1 than the other three groups (p<0.05). However, there was no significant difference among groups 2, 3 and 4 (Table 2). Endometrial thickness was lower in patients who underwent the antagonist protocol compared to the agonist protocol, however this difference was not statistically significant (Table 3).

Distribution of endometrial thickness according to stimulation protocol

Although measurement of endometrial thickness is commonly utilized in clinical practice during assisted reproduction treatment, there are conflicting results regarding the association between endometrial line and IVF-ICSI outcome. Al-Ghamdi et al. have analyzed 2464 cycles and reported a positive linear relationship between the endometrial thickness measured on the day of hCG injection and CPR (6). On the other hand, Bassil assessed the endometrial features by TV-USG and claimed that endometrial measurements do not provide significant prognostic information with regards to the outcome of IVF (8).

There were only two clinical pregnancies (14.3%) in the current study that had an endometrial line less than 7 mm, of which one was lost. In our study the thinnest endometrial stripe was 6.1 mm. When CPR was compared with each millimeter of the endometrial line we found that the pregnancy rates decreased below the 7 mm thickness level. CPR was significantly lower in group 1 than the other groups. However, the difference among groups 2, 3, and 4 were not statistically significant. Chen reported that CPR was 23.0% (12/52) in patients whose endometrial line was below 7 mm (15). These values were higher than our results. Therefore, we should perform IVF-ICSI in these patients. 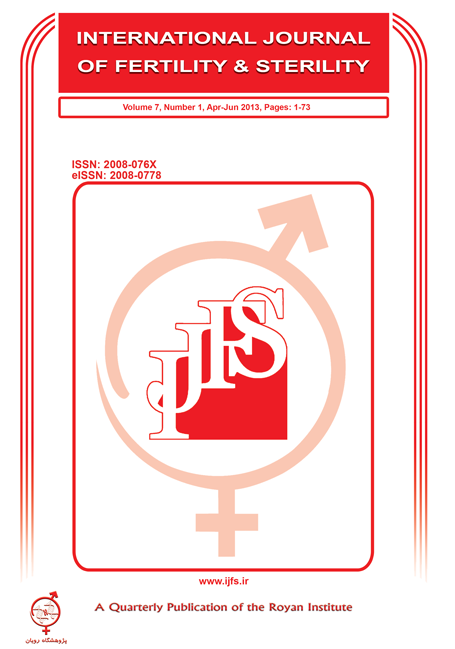